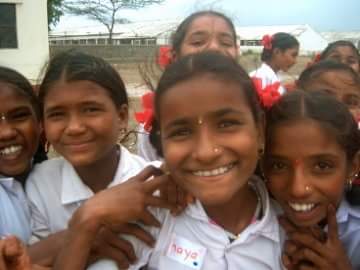 Woman to Woman, Girl to Girl

In a world whereby 3 out of 10 women will experience violence within their lifetime, I believe it is imperative that we defend the rights of all women and girls. We can each play a role in making the world a safer and better place for everyone, especially young women and girls. You can take small actions in your local community by creating safe spaces for young women and girls, promoting gender equality and breaking down gender stereotypes.

Volunteering with a organisation working on the rights of women and girls is one way to make a positive change and contribution towards humanity. Back in 2007 I decided to travel across the world to India and do just that!

Anyone who knows me, knows that I have always been a fierce feminist and a bit of do-gooder. From my first year in University I started working part time for the YWCA, now known as the Young Women’s Trust, this organisation supports and represents women aged 16-30 struggling to live on low or no pay in England and Wales and who are at risk of being trapped in poverty. It felt great to be able to help and support young women in need within my very own local community. Designing programmes around understanding the dangers of alcohol and drug abuse, practicing safe sex and healthy relationships and civic participation, was a enriching experience for me. The young women I worked with gained a lot of knowledge and brought so much understanding themselves. It was during this time that I decided to go to India.

Arriving in India I truly felt like Alice in Wonderland, it was a REAL culture shock. Amazingly overwhelming and totally beautiful. I was taken in by all the vibrant colours, rich smells of the spices and big smiles. There are people EVERYWHERE! This was another shock to the system. The volumes of people on the streets, in the markets, in the train station or basically any public space is always huge. After sometime I began to make friends and get settled into the Indian way of life. 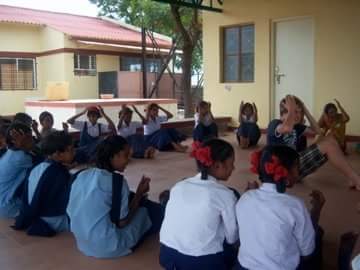 India is a country like no other, however it has its problems like everyone else. Harmful traditional practices such as child marriage still exist. A National Action Plan to prevent child marriages was drafted by the Ministry of Women and Child Development in 2013, however, it has not yet been finalised. Child marriage occurs for a pyramid of reasons and one large factor is poverty. Many families claim that they can not financially support having so many children and as the girls usually don’t work meaning they will not be contributing financially to the household, it is easier to get your daughter married off as quickly as possible. Therefore, there is one less mouth to feed in the household. This argument bothers me very much as I see solutions to this problem, however I know that it is a reality for thousands of families. Soon after my arrival in India I started volunteering with a local NGO run by a wife and husband from Mumbai who worked directly on ending child marriage.

We started by mapping a 20 mile radius from the city of Pune and surveying all the local villages. From there we began a grassroots campaign to encourage families to send their daughters to school. Another knock on effect of child marriage, is the high dropout rates of girls from school. Once married the girls become wives and have to do all the household duties that come along with it. Some parents don’t see the benefit of sending girls to school at all as they say “what’s the point? They are girls, girls don’t work so why invest in their education?”

My job as a lead campaigner was to coordinate meetings between parents and the school. The idea being to influence the minds of the parents and to help them see they value in sending your daughter to school. We highlighted also the horrors of child marriage and named it blatantly for what it is: Child Abuse and Sexual Abuse. It is important to note that these girls are usually married off to men who are much older then them. It is truly horrific.

You can not fix a problem in isolation as everything is connected and effects one another. Therefore, we knew that by just working with the parents alone this wouldn’t have much impact. We had to look also at job opportunities for young women. If these girls do get an education, what jobs are available for them? As their parents say girls don’t work. So we began to break down gender stereotypes around female employment. We also began working in the schools with pupils discussing female role models and the capabilities of women. We looked at what jobs young women were getting in the community and beyond in the bigger cities. We asked companies to come into the school and speak to pupils and parents about job opportunities for young women.

Soon it was clear that YES girls can get education, YES girls can find employment later in life and YES girls don’t have to become child brides. It is very hard to find words to describe how I felt witnessing the change and being a volunteer working with such awesome, kind and brave people. There were those in the community who didn’t like our vision but we never let them stand in our way.

I volunteered in India for one year before returning to the UK. Volunteering for me is a great opportunity to learn and grew as an individual and develop professionally. There is no greater reward than helping another person. For me that person usually tends to be a girl or a young woman. I encourage everyone to get active and do some volunteering.

Marcia Banasko is a Human Rights activist and performer. She holds a bachelor in International Development and Latin American Studies. For several years she worked alongside the United Nations for an international women’s rights organisation as their communication and advocacy officer. Marcia has campaigned globally to end child marriage, all forms of violence against women including domestic violence and for women to fully enjoy their sexual reproductive health and rights. She is now the co-founder of One Love Soul, a global humanitarian project for refugees, Roma communities and those most vulnerable, using music, dance and sport to promote human rights and well-being.